121. Four of the following five are alike in a certain way and so form a group. Which is the one that does not belong to that group?

124. Pointing to the lady in the Photograph, Mrinalini said, ''Her son's father is the only son-in-law of my mother". How is Mrinalini related to the lady?

125. In a certain code 'MOTHER' is written as OMHURF. How will 'ANSWER' be written in that code?

Directions (126 - 130): Study the following information carefully and answer the questions given below:

B, M, T, R, K, H and D are travelling in a train compartment with II-tier sleeper berth. Each of them has a different profession of Engineer, Doctor, Architect, Pharmacist, Lawyer, Journalist and Pathologist. They occupied two lower berths, three middle berths and two upper berths. B, the Engineer is not on the upper berth. The Architect is the only other person who occupies the same type of berth as that of B. M and H are not on the middle berth and their professions are Pathologist and Lawyer respectively. T is a Pharmacist, D is neither a Journalist nor an Architect. K occupies same type of berth as that of the Doctor.

127. Which of the following group occupies middle berth?

128. Which of the following combinations of person-berth-profession is correct?

129. Which of the following pairs occupy the lower berth?

134. If the letters of the word ''PRINCE" rearranged as they appear in the English alphabet, the position of how many letters will remain unchanged after the rearrangement?

Now in each of the following questions assuming the given statements to be true, find which of the two conclusions I and II given below them is/are definitely true?

Directions (141 - 145): Answer the questions given below referring to the following arrangement:

141. Four of the following five are alike in a certain way as regards their position in the above arrangement and so form a group. Which is the one that does not belong to that group?

142. What will come in the place of the question mark (?) in the following series based on the above arrangement?

143. If the above series is re-arranged in the reverse order, which will be the eleventh element to the left to the sixteenth element's from the left end?

144. How many such numbers are there in the above arrangement each of which is immediately preceded by a consonant and not immediately followed by a symbol?

145. How many such symbols are there in the above arrangement each of which is immediately preceded by a number and immediately followedby a consonant?

147. Statements: All males are wolves
All owls are males
All parrots are owls

148. Statements: Some leaves are skies
All skies are clouds
No cloud is a boat

149. Statements: No building is white
All whites are oranges
Some oranges are waters

Directions (151 - 155): Following is given a set of digits and the corresponding letter code of each digit followed by certain conditions for coding.

In each question one number consisting six digits followed by four combinations of letter codes. You have to find out which of the combination of letter codes represents the set of digits based on the above codes and the conditions given below and mark your answer accordingly. Otherwise give answer (5), i.e. None of these.

Directionss (156 - 160): In each of the questions given below which one of the five answer figures should come after the problem figures, if the sequence were continued? 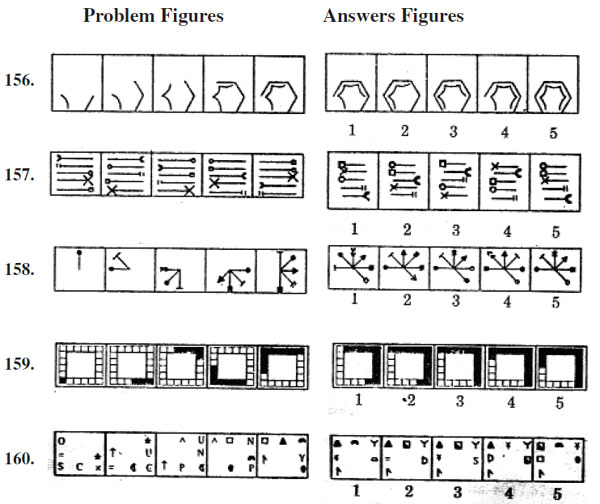