No factory is an industry.
All workshops are industries.
Some plants are workshops.

I. No workshop is a factory.
II. At least some plants are industries.

Some sands are particles.
Some particles are glasses.

Some movies are films.
No film is a show.
All shows are pictures.

I. At least some pictures are films,
II. No show is a movie.

Some actors are singers.
All singers are dancers.
Some dancers are players.

I. All actors being dancers is a possibility.
II. All dancers are singers.

Some actors are singers.
All singers are dancers,
Some dancers are players.

I. At least some dancers are actors.
II. No player is an actor.

Directions (71-75): Study the lowing. information to answer then the questions.

Eight friends G, H, I, J, N, O, P and Q are seated in a straight line, but not necessarily in the same order sits second to right of O.O sits at one of extreme ends of the line.  Only three people sit between Hand N. its third to the left of J. Only two people between J and G.

71. Who amongst the following represents the person seated at the extreme right end of the line?

72. Who amongst the following sit exactly between J and G?

73. What is the position of P with respect to N?

74. Based on the given arrangement; which of the following is true with resepct to Q?

75. How many persons are seated between P and G ?

Directions (76-80): Study the information carefully and answer the questions.

N, O, P, Q, R, S, T and U are sitting around a circular area at equal distances between each other, but not necessary in the same order. Some of the people are facing thecentre while some face outside (i.e. in a direction oppostie to the centre).

76. Four of the following five are alike in certain way based on the given seating arrangement and so form a group. Which is the one that does not belong to that group?

78. As per the given seating arrangement, wich of the following is true regarding S?

(a) U is one of the immediate neighbours of S.
(b) S sits third to the right of R.
(c) S faces the centre.
(d) Only two people sit between S and T
(e) Only oen person sits between S and N.

79. What is the P's position with respect to N?

80. How many people in the given arrangement face outside?

Directions (81-85): Study the given information carefully to answer the given questions.

J, K, L, M, N, O and P live on seven different floors of a building but not necessarily in the same order. The lowermsot floor of the building is numbered 1, the one above that is numberd 2 and so on till the topmost floor is numbered 7. Each one of them also like a different subject namely—English, History, Commerce, Biology, Accounts, Geography and Computer. (but not necessarily in same order.)

82. Which of the following combinations is true with respect to the given arrangement?

83. If all teh people are made to sit in alphabetical order from top to bottom, the positions of how many people will remain unchanged?

84. Which of the folowing statements is true with respect to the given arrangement?

85. Who amonst the following lives on the floor numbered 6?

Directions (87-89): Study the following information and answer the given questions. \

Directions (91-95): In this questions, relationship between different elements is shown in the Statements. The statements are followed by conclusions. Study the conclusions based on the given statement and select the appropriate answer. 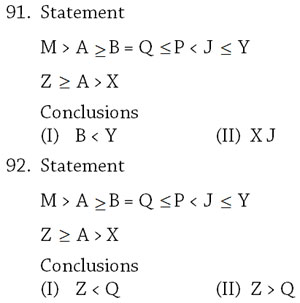 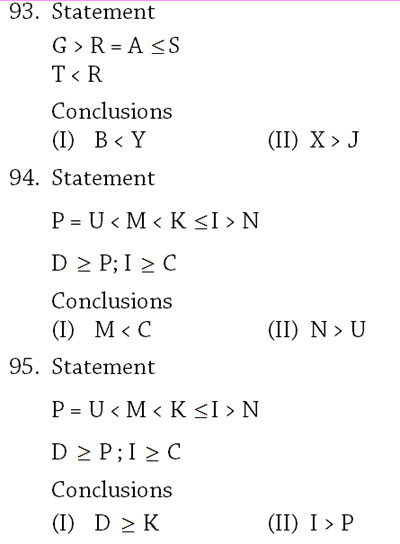 Directions: (96-100): Study the given information carefully to answer the given questions.

In a certain code language,

96. In the given code language, what does the code ‘pr’ stand for?

97. What will be the code ‘for ‘the pretty’ in the given code language?

98. What is the code for ‘bugs’ in the given code language?

99. What may be the possible code for ‘pretty’ in the given code language?

100. What may be the possible code for ‘shouted and ate’ in the given code language?