121-125. Each of the questions given below is based on the given diagram. The diagram shows three figures each representing Scientists, Government employees and employees of Company X. 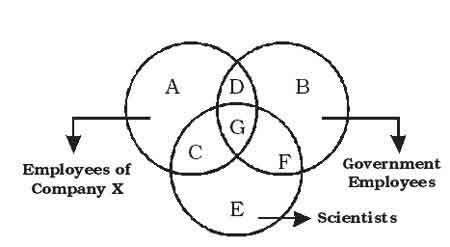 121. Which of the following represent all such Scientists who are Government employees but are not employed in Company X?
(a) Only C
(b) C and G
(c) G, C and F
(d) C and F
(e) Only F

122. Which of the following represents such employees of company X who are also Government employees but are not Scientists?
(a) D and G
(b) Only D
(c) G and F
(d) Only A
(e) None of these

125. Which of the following groups represents all such Scientists who are Governments employees as well as employed with Company X?
(a) Only A
(b) F and G
(c) Only G
(d) Only B
(e) Not represented in the diagram

126-130. Study the following arrangement carefully and answer the questions given below:

127. How many such 4s are there in the above arrangement each of which is immediately preceded as well as immediately followed by an odd digit?
(a) None
(b) One
(c) Tow
(d) Three
(e) More than three

128. How many such 1s are three in the above arrangement, each of which is immediately preceded or immediately followed by a perfect square?
(a) None
(b) One
(c) Two
(d) Three
(e) More than three

129. How many 3s are three in the above arrangement, each of which is immediately preceded by a digit which has a numerical value of less than three?
(a) None
(b) One
(c) Two
(d) Three
(e) More than three

131-135. Following questions are based on five words given below:
MET ARK MOB SKI URN
(The new words formed after performing the mentioned operations may or may not necessarily be meaningful English words)

131. In the second alphabet in each of the words is changed to the previous alphabet in the English alphabetical order, how many words having no vowels will be formed?
(a) None
(b) One
(c) Tow
(d) Three
(e) Four

132. If in each of the words, all the alphabets are arranged in English alphabetical order within the word, how many words will begin with a vowel?
(a) None
(b) One
(c) Two
(d) Three
(e) More than three

133. If the given words the arrangement in order as they would appear in a dictionary from left to right, which of the following will be second from the right?
(a) MET
(b) RK
(c) MOB
(d) SKI
(e) URN

134. If in each of the given words, each of the consonants is changed to previous letter and each vowel is changed to next letter in the English alphabetical series, in how many words thus formed will no vowels appear?
(a) None
(b) One
(c) Two
(d) Three
(e) More than three

136. Statements : No toffee is coffee. No sweet is toffee.
Conclusions : I. No coffee is sweet.
II. Al sweets are coffee.

139. Statements : All bottles are glasses. No cup is a glass.
Conclusions : I. No bottle is a cup
II. Atleast some glasses are bottles

143-145. Stud the following information to answer the given questions:
Amongst five friends, P, Q, R, S and T, each scored different marks in an examination out of a total of 100 marks. S scored more than only T. R scored less than P. only one person scored more than Q. The one who scored second highest marks scored 87 marks.

144. Which of the following is true with regard to the given information?
(a) Only one person scored more than P
(b) No one scored less than T
(c) R scored more than both Q and S
(d) Amongst the five friends, S is most likely to have scored 95 marks in the examination
(e) None is true

146-150. Study the following information to answer the given questions:
Eight people are sitting in two parallel rows containing for people each, in such a way that there is an equal distance between adjacent persons. In row 1-A, B,C and D are seated (but not necessarily in the same order) and all them are facing south. In row 2-E, F, G and H are seated (but not necessarily in the same order) and all of them are facing north. Therefore, in the given seating arrangement each member seated in a row faces another member of the other row.
G sits second to right of E. The one who faces E sits to the immediate right of C. A faces the immediate neighbour of E. H sits to immediate left of the person who faces D. H does not sit at n extreme end of the line.

149. Which of the following is true regarding B?
(a) B sits exactly between C and D
(b) D sits second to right of B
(c) B sits at an extreme end of the line
(d) B is an immediate neighbour of the person who faces F
(e) None is true

150. Four of the following five are alike in a certain way based on the given seating arrangement and thus from a group. Which is the one that does not belong to that groups?
(a) E
(b) D
(c) F
(d) G
(e) A

151-160. In each of the questions given below which one of the five answer figures on the right should come after the problem figures on the left, if the sequences were continued?