2. Four of the following five are alike in a certain way and so form a group. Which is the one that does not belong to that group?

3. How many meaningful English words can be made with the second, the fourth, the sixth and the seventh letters of the word STUMBLE using each letter only once in each word?

4. What should come in place of the question mark (?) in the following letter series based on the English alphabetical order?
BE GJ LO QT ?

5. How many such pairs of letters are there in the word GOVERNMENT each of which has as many letters between them in the word (in both forward and backward directions) as in the English alphabet?

Directions (6-10): In the following questions, the symbols d %, $, # and @ are used with the following meaning as illustrated below:

Now in each of the following questions assuming the given statements to be true, find which of the two conclusions I and II given below them is/are definitely true?

Directions (11-15): Study the following information carefully and answer the questions given below:

12. Who is the only one person sitting between A and G?

Note: All the remaining letters are to be coded as per their original codes. 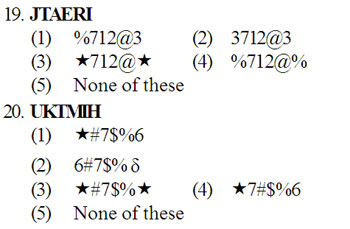 Give answer (4) if the data given in both the statements I and II together are not sufficient to answer the question.

Give answer (5) if the data in both the statements I and II together are necessary to answer the question.

21. In a row of girls facing North, what is D’s position from the left end?

I. D is twentieth from the right end.
II. There are ten girls between B and D.

22. Town M is towards which direction of Town K?

23. How many daughters does P have?

24. On which day of the week from Monday to Sunday did Arun leave for London?

Directions (26-30): Study the following information carefully and answer the given questions:

A word and number arrangement machine when given an input line of words and numbers rearranges them following a particular rule in each step. The following is an illustration of input and rearrangement, (All numbers are two-digit numbers.) Input : good for everything 19 37 26 all 65

and Step VI is the last step of the rearrangement as the desired arrangement is reached. As per the rules followed in the above steps, find out in each of the following questions the appropriate step for the given input. (All numbers are two-digit numbers.)

How many steps will be required to complete the rearrangement ?

Which of the following will be Step VI?

How many more steps will be required to complete the rearrangement?

Which of the following is def tmtely the input?

Which of the following steps will be the last but one?

Directions (31-35): Study the following information carefully and answer the questions given below:

Each of them has a favourite (likes) cuisine viz. Punjabi, Rajasthani, Bengali, Maharashtrian, Gujarati. Kashmirt and Udipi not necessarily in the same order.

31. Which of the following combinations is correct?

32. Whose favourite cuisine is Rajasthani?

33. What is S’s favourite cuisine?

34. What is Q’s favourite cuisine?

35. In which bus are three of them travelling?

No holiday is vacations.
Some vacations are trips,

I. No trip is a holiday,
II. Some holidays are definitely not trips.

Some kites are birds,
No kite is an aeroplane.

I. All aeroplanes are birds.
II. Some birds are definitely not kites.

All metals are plastics.
All plastics are fibres.

I. Atleast some fibres are metals.
II. Some metals are not fibres.

All roads are streets.
No street is a highway.

I. No highway is a road.
II. All streets are roads.

Some animals are plants.
All plants are rocks.

Directions (41-50) : In each of the questions given below which one of the five answer figures on the right should come after the problem figures on the left, if the sequence were continued? 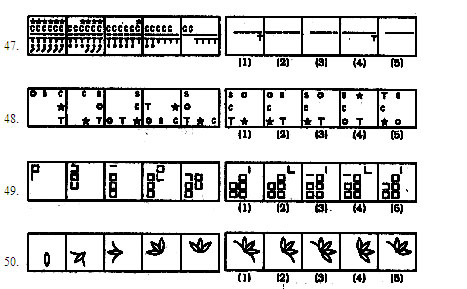