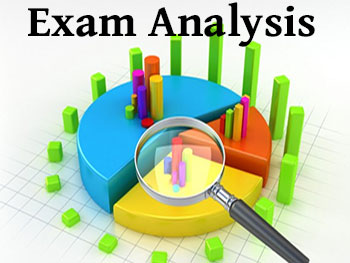 It has been reported that the online IBPS PO/MT CWE V Main examination held on 31st Oct 2015 was very difficult. The Reasoning Section was the difficult most section of all the five sections. The Quant Section was also tough. English section was moderate and the GA and Computer Sections were easy. A similar trend was followed for the exam held in both shifts on 31st Oct 2015.

The snap shot of the exam is given below.

The analysis of the above mentioned session, as reported by our students, is given below.

According to the feedback received from our students who appeared for this exam, this section can be rated as difficult and time-consuming.

The individual questions in this section were based on topics of ages,time and distance, time and work, averages, profit and loss, partnership, plane geometry, mensuration, simple interest and mixtures. Though not direct questions ,students commented that they were tricky and a complete knowledge of concepts was mandatory in order to solve them. There were no questions on Permutations/Combinations/Probability, Quadratic Comparisons, Simplifications & Approximations. Questions on Data Sufficiency ( 2 statements) were present in this test as they were in the previous year too.

This section has been given a ' very difficult' tag.

The emphasis here was on puzzles, which were tough to tackle. The questions on deductions (all were based on 'do not follow' pattern) were moderate. The questions on Input/output were a tough nut to crack !!. There were no questions on Coding-Decoding and symbol / notation based Statements and Conclusions. The Data Sufficiency topic posed moderate questions. About 10 questions were asked on Critical Reasoning.

The pattern of this section was almost in line with what was expected. There were two RC passages with a total of ten questions per passage. The weightage given to questions on Synonyms/Antonyms in the passages was less, which is a deviation from the norm. The passages were too lengthy.

The questions asked on Para Jumbled can be termed as difficult. Grammar questions were quite easy to answer.

The cloze test passage that appeared in the exam (as reported by our student) puts the level of the passage as moderate.

Overall, this section can be rated as moderate.

About half of the questions asked here were on Banking Awareness and Indian Economy, the others were on Current Affairs. Students report this section as easy.

There were 20 questions on Computers, and they dealt with MS Office, Networking, Operating system, Internet, Computer Architecture etc. Only about 2-3 questions were found to be difficult by students.

After the actual online examination was conducted, an online Personality Test was also conducted. The duration of the test was 45 minutes. This test was divided into two parts – Part I with 76 questions and Part II with 60 questions. The time duration for answering the questions in both parts was 45 minutes. For all the questions the five choices were the same – Agree, Strongly Agree, Disagree, Strongly Disagree and Neutral/Neither Agree nor Disagree.

This test was not compulsory. Students were able to submit the test even before the stipulated time of 45 minutes.