2. In a certain code TEMPORAL is written as OLDSMBSP. How is CONSIDER written in that code?

3. How many meaningful English words can be made with the letters DLEI using each letter only once in each word ?

4. Among A, B, C, D and E each having different weight, D is heavier than only A and C is lighter than B and E. Who among them is the heaviest ?

9. Town D is towards East of town F. Town B is towards North of town D. Town H is towards South of town B. Towards which direction is town H from town F ?

10. How many such pairs of letters are there in the word SEARCHES each of which has as many letters between them in the word as in the English alphabet ?

11. Statements: All cups are bottles. Some bottles are jugs. No jug is plate. Some plates are tables.

I. Some tables are bottles.
II. Some plates are cups.
III. No table is bottle.
IV. Some jugs are cups.

12. Statements: Some chairs are handles. All handles are pots. All pots are mats. Some mats are buses.

13. Statements: All birds are horses. All horses are tigers. Some tigers are lions. Some lions are monkeys.

14. Statements: Some benches are walls. All walls are houses. Some houses are jungles. All jungles are roads.

Direction: Study the following information carefully and answer the questions given below:

A, B, C, D, E, F, G and H are eight employees of an organization working in three departments viz. Personnel, Administration and Marketing with not more than three of them in any department. Each of them has a different choice of sports from football, cricket, volleyball, badminton, lawn tennis, basketball, hockey and table tennis not necessarily in the same order.

16. Which of the following groups of employees work in Administration department ?

17. In which department does E work ?

18. Which of the following combinations of employee-department-favourite sport is correct?

Now in each of the following questions assuming the given statements to be true, find which of the four conclusions I, II, III and IV given below them is/are definitely true and give your answer accordingly.

Direction: Study the following information carefully and answer the questions given below

Following are the conditions for selecting Senior Manager-Credit in a bank. The candidate must—

In each question below details of one candidate is given. You have to take one of the following courses of action based on the information provided and the conditions and sub-conditions given above and mark the number of that course of action as your answer. You are not to assume anything other than the information provided in each question. All these cases are given to you as on 01.04.2010.

27. Rohan Maskare was born on 8th March 1974. He has been working in a bank for the past twelve years after completing his B.Com. degree with 70 percent marks. He has secured 50 percent marks in both the Group Discussion and the Interview.

Direcion: In each question below is given a statement followed by three courses of action numbered (A), (B) and (C). A course of action is a step or administrative decision to be taken for. improvement, follow-up or further action in regard to the problem, policy, etc. On the basis of the information given in the statement, you have to assume everything in the statement to be true, then decide which of the suggested courses of action logically follow(s) for pursuing.

31. Statement : A heavy unseasonal downpour during tho last two days has paralysed the, normal life in the state in which five persons were killed but this has provided a huge relief to the problem of acute water crisis in the state.

32. Statement: A large private bank has decided to retrench one-third of its employees in view of the huge losses incurred by it during the past three quarters.

(A) The Govt. should issue a notification to general public to immediately: stop all transactions with the bank.
(B) The Govt. should direct the bank to refrain from retrenching its employees.
(C) The Govt. should ask the central bank of the country to initiate an enquiry into the bank’s activities and submit its report.

33. Statement: Many political activists have decided to stage demonstrations and block traffic movement in the city during peak hours to protest against the steep rise in prices of essential commodities.

(A) The Govt. should immediately ban all forms of agitations in the country.
(B) The police authority of the city should deploy additional forces all over the city to help traffic movement in the city.
(C) The state administration should carry out preventive arrests of the known criminals staying in the city.

34. Statement: The school dropout rate in many districts in the state has increased sharply during the last few years as the parents of these children make them work in the fields owned by others to earn enough for them to get at least one meal a day.

35. Statement: One aspirant was killed due to stampede while participating in a recruitment drive of police constables.

(A) The officials incharge of the recruitment process should immediately be suspended.
(B) A team of officials should be asked to find out the circumstances which led to the death of the aspirant and submit its report within a week.
(C) The Govt. should ask the home department to stagger the number of aspirants over more number of days to avoid such incidents in future.

36. Effect: Majority of the employees of the ailing organization opted for voluntary retirement scheme and left the organization with all their retirement benefits within a fortnight of launching the scheme.

Which of the following can be a probable cause of the above effect ?

(1) The company has been making huge losses for the past five years and is unable to pay salary to its employees in time.
(2) The management of the company made huge personal gains through unlawful activities.
(3) One of the competitors of the company went bankrupt last year.
(4) The company owns large tracts of land in the state which will fetch huge sum to its owners.
(5) None of these

37. Statement: Most of the companies in IT and ITES sectors in India have started hiring from engineering college campuses this year and are likely to recruit much more than yearly recruitment of the earlier years.

Which of the following substantiates the facts stated in the above statement ?

(1) IT and ITES are the only sectors in India which are hiring from engineering college campuses.
(2) Govt. has stepped up recruitment activities after a gap of five years.
(3) The IT and ITES companies have now decided to vi sit the engineering college campuses for tier II cities in India as well.
(4) Availability of qualified engineers will substantially in crease in the near future.
(5) None of these

38. Cause: The Govt. has recently increased its taxes or, petrol and diesel by about 10 percent. Which of the following can be a possible effect of the above cause ?

39. Statement : The Govt. has decided to instruct the banks to open new branches in such a way that there is one branch of any of the banks in every village of population 1000 and above or a cluster of villages with population less than 1000 to provide banking services to all the citizens. Which of the following will weaken the step taken by the Govt. ?

(1) The private sector banks in India have stepped up their branch expansion activities in rural India.
(2) Many Govt. owned banks have surplus manpower in its urban branches.
(3) All the banks including those in private sector will follow the govt. directive.
(4) Large number of branches of many Govt. owned banks in the rural areas are making huge losses every year due to lack of adequate business activities.
(5) None of these

Direction: Study the following information carefully and answer the questions given below.

The centre reportedly wants to continue providing subsidy to consumers for cooking gas and kerosene for five more years. This is not good news from the point of view of reining in the fiscal deficit. Mounting subventions for subsidies means diversion of savings by the government from investment to consumption, raising the cost of capital in the process. The government must cut expenditure on subsidies to create more fiscal space for investments in both physical and social infrastructure. It should outline a plan for comprehensive reform in major subsidies including petroleum, food and fertilizers and set goal posts.

40. Which of the following is a conclusion which can be drawn from the facts stated in the above paragraph ?

(1) Subsidy provided by the government under various heads to the citizen increases the cost of capital.
(2) Govt. is unable to withdraw subsidies provided to various items.
(3) Govt. subsidy on kerosene is purely a political decision.
(4) Govt. does not have enough resources to continue providing subsidy on petroleum products.
(5) None of these

41. Which of the following is an inference which can be made from the facts stated in the above paragraph ?

(1) India’s fiscal deficit is negligible in Comparison to other emerging economies in the world.
(2) Subsidy on food and fertilizers are essential for growth of Indian economy.
(3) Reform in financial sector will weaken India’s position in the international arena.
(4) Gradual withdrawal of subsidy is essential for effectively managing fiscal deficit in India.
(5) None of these

42. Which of the following is an assumption which is implicit in the facts stated in the above paragraph ?

(1) People in India may not be able to pay more for petroleum products.
(2) Many people in India are rich enough to buy petroleum products at market cost.
(3) Govt. may not be able to create more infrastructural facilities if the present level of subsidy continues for a longer time.
(4) Govt. of India has sought assistance from international financial organizations for its infrastructural projects
(5) None of these

Direction: Study the following information carefully and answer the questions given below.

43. Which of the following is a conclusion which can be drawn from the facts stated in the above paragraph ?

(1) Accurate estimates of number of people living below poverty line in India is possible to be made.
(2) Many expert groups in India are not interested to measure poverty objectively.
(3) Process of poverty measurement needs to take into account various factors to tackle its dynamic nature.
(4) People living below poverty line remain in that position for a very long time.
(5) None of these

44. Which of the following is an assumption which is implicit in the facts stated in the above paragraph ?

45. Which of the following is an inference which can be made from the facts stated in the above paragraph ?

(1) Poverty measurement tools in India are outdated.
(2) Increase in number of persons falling into poverty varies considerably across the country over a period of time.
(3) Govt. of India has stopped measuring poverty related studies.
(4) People living in rural areas are more susceptible to fall into poverty over the time.
(5) None of these

Direction: In each of the questions given below which one of the five answer figures on the right should come after the problem figures on the left, if the sequence were continued ? 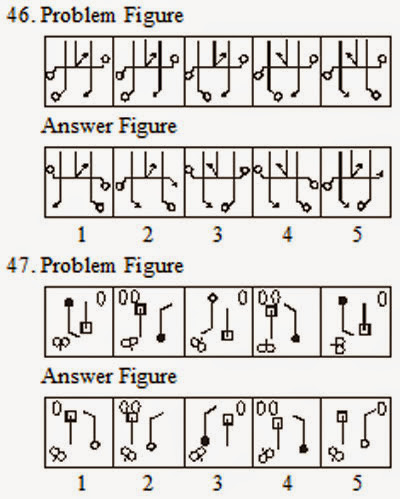 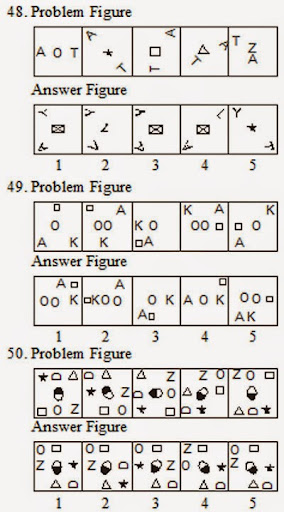